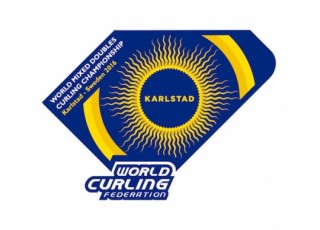 This blog has discussed #growthesport all season with respect to #curling and this preview blog post could be the best representation supporting the hashtag.  The World Mixed Doubles Curling Championships have hit the ice in Karlstad, Sweden.  With mixed doubles becoming a new discipline in the Olympics, the opportunity for more nations and more athletes to compete at the Olympics grows.

Before we get too far ahead of ourselves though, let's talk about the specific discipline of mixed doubles curling.  Many may not be familiar with the change in rules and format for the sport.  Here is a brief overview of what you will see when watching mixed doubles curling:

Ok, got all that down?  Mixed doubles is a fast paced machine of a game usually with lots of offense and scoring.  It is not uncommon to see teams score 3 or 4 points an end.  It is also not uncommon to see teams take early 4-0 or 5-0 leads in a game and still end up losing.  If you enjoy lots of rocks in play, high scoring and #noleadissafe, mixed doubles curling is right for you!

So now that you have some understanding of the rules, let's take a quick look at what to expect at #wmdcc2016:


We have an understanding of the sport, right?  We have some background info on the history of the championships and what to expect in 2016, right?  Let's get to the fun part: #TourLifePredictions.  This is going to be a bit difficult to predict, given the vast majority of nations competing and with many nations fielding athletes who are not regularly featured on tour.  However, this will not deter #TwineTime....I like a challenge.  This preview will be a bit different than my past event previews.  Rather than provide an overview, I will do a quick breakdown by group before listing my playoff qualifiers and podium finish.  Here we go....

Format:  42 nations divided into 6 pools of 7 nations for a round robin.  The top overall 16 nations advance to the playoffs.  Note because Olympic qualification points are on the line, the format of 8 playoff teams in the past has been increased to 16.  In addition, playoff losing nations will still play to determine final rankings and points.

This should be the most competitive pool...at the top anyways.  Here we find defending champions Hungary (Palancsa and Kiss) paired up with dominant Switzerland (Yves Hess and Flurina Kobler).  These two nations should comfortably advance to the playoff round.  Latvia and Slovakia could be dark horse qualifiers though.

Here you should see many familiar names to the world curling tour.  Two-time world women's champion Andrea Schopp is representing Germany (with brother Rainer Schopp).  Finnish women's champion Oona Kauste will represent Finland (with Tomi Rantamaki).  Former Austrian women's champ Karina Toth will join junior champ Sebastian Wunderer to represent Austria.  This group also has the #1 ranked team in the world, and host nation, Sweden as well as the 2018 Olympic hosts South Korea.  To say this could be the group of death is an understatement.  There are easily 5 nations here with playoff hopes going into the event.  Someone is leaving this group disappointed and well behind the Olympic 8-ball at the end of the round robin.  This group also welcomes newcomer Lithuania...yikes!

The group of opportunity!  None of the nations competing in this group have really found decent success, if any, at the world mixed level.  A wide open group means if a team can get hot, get on a role and win a few games early they could find themselves in prime position for a playoff run and some major Olympic points.  Norway may have a slight advantage on the world stage with women's champ Kristin Skaslien competing.  England will be lead by Team Fowler (Ben and Anna), both of whom are familiar to world tour events in Europe.  And don't forget Dilsat Yildiz, junior women's champ from Turkey.  Recently Yildiz brought a 4th place finish at the Euro Women's B Division.  And don't underestimate Japan, led by power coach J.D. Lind.  Lind did just coach the Japanese women to a silver medal finish at the recent world women's curling championship.  Welcome another newcomer to this group: Luxembourg.

Here we find perennial curling powerhouse Canada, represented by national bronze medal winners Marliese Kasner and Dustin Kalthoff.  I will spare the blogging world my thoughts on the Canadian championships and how we ended up sending our bronze medal winners to this event...for now (hint: all about the money $$$$).  Anyways, Kasner does bring a wealth of experience to the ice though and is a former world junior champion.  On paper this looks like a slam dunk group for Canada but I think it will be more difficult than many expect.  Italy, China and Australia have experience of last year and will be looking to improve.  Ireland has seen strong growth in the sport over the past few season, much thanks to their world men's senior championship title in 2012.  The only thing certain might be a bottom of the group placing for newcomer Serbia.

Similar to Group D, here we find another North American team (USA) who should be the overwhelming favorites to win the group.  USA is represented by Joe Polo and Tabitha Peterson.  Polo won a bronze medal for USA at the 2006 Olympics.  Peterson won a bronze medal for USA at the 2010 World Junior Championships.  Both Polo and Peterson have tones of tour experience as well, which should give them a strong upper hand this week.  Team USA has never found a podium in 8 years though....they need a strong result here to have a shot at the Olympics.  New Zealand should pose the biggest challenge with Denmark also being a team to watch for.  This group also welcomes newcomer Israel.

Another group of opportunity.  Similar to Group C, Group F finds a few nations still looking to get their slider wet on the mixed doubles ice and find some traction.  The Czech Republic and Russia should be the pre-event group favorites, given past performances and the willingness of their national federations to invest in the sport from the beginning.  However, their 3 European counterparts (Estonia, Scotland, Wales) will be no slouch competition.  Scotland will be lead by newly crowned World Junior Men's Champion Bruce Mouat and joined with fellow Scottish junior champion Gina Aitken.  Estonia could be the ultimate surprise nation here though.  They finished with a 7-2 record last year and made the quarterfinals.  Imagine Estonia competing at the 2018 Winter Olympics in curling?  It could happen folks!  This group welcomes our final newcomer Qatar as well as our only South American entry Brazil.

WORLD MIXED DOUBLES CURLING CHAMPIONSHIP GOLD:  Hungary over Austria - The Hungarian team has the most experience of all 42 nations competing this week and are 2-time world champions.  They are comfortable with the format and should have a huge advantage when it comes to overall strategy in close games.  With Olympic qualification points on the line this year, expect this team to come out firing even stronger than before....plus they want that #1 world ranking they feel they deserve.  Austria is my wildcard finalist team.  Toth and Wunderer are both great curlers and have been trying to #growthesport in Austria for a few seasons.  Toth has been to European and World Championships.  Wunderer is an up and coming junior who can bring Austrian men's curling up to the elite status in Europe.  Both Hungary and Austria are not considered power house curling nations; however, by the end of this championship they will be at the front of the pack towards locking up an Olympic spot. 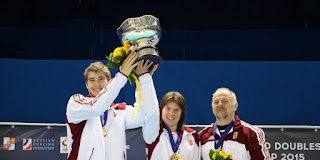 World Mixed Doubles Curling Championship Bronze:  Canada over USA - Both North American nations are starting to invest more time and money towards the discipline now that it is an Olympic sport.  Stronger results mean greater opportunity for funding towards the sport overall...something both national governing boards want to see happen.  Neither Canada nor the USA have ever really excelled at mixed doubles on the world stage but this is the perfect time to start.  I honestly don't see either nation winning the championship or being in the final but a deep playoff run is not out of the question given the resume of the teams.  While both will come up short in the semi-final, a nice North American rivalry match-up for the final spot on the podium will be nice to see.

There you have it rock heads and stoners.  My attempt at handicapping a very competitive, and slightly wide open, world mixed doubles curling championship.  My picks could end up being WAY off base....or I may just find my podium picks right on target.  Who knows?!  What I do know is if you are a curling fan, new to the sport or a seasoned veteran, take some time this week to watch these athletes and these developing nations compete.  Check out LIVE video and scoring at World Curling Federation event home page.  And, as always, share your thoughts on #wmdcc2016 in the comments section below or on twitter with yours truly.
Posted by TwineTime at 18:35:00
Email ThisBlogThis!Share to TwitterShare to FacebookShare to Pinterest
Labels: #Austria, #BetweenTheSheets, #canada, #curling, #CzechRepublic, #Estonia, #Hungary, #mixeddoubles, #noleadissafe, #PowerPlay, #Sweden, #Switzerland, #TourLifePredictions, #TwineTime, #USA, #wmdcc2016, #worldcurling