#BetweenTheSheets: Top 6 of '16
Which #TwineTime blog posts made the most noise this year? 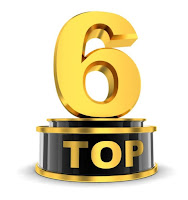 It's that time of year stoners and rock heads...the time we say goodbye to the year that was and hello to the year that will be.  New Year's is always a bit anti-climatic I find.  Such build up, anticipation and excitement for a 10 second countdown, blowing some noise makers, kissing someone and downing your one glass of champagne for the year (because really who drinks champagne all year??).  The parallel comparisons to being a 21 year old at the bar on a Saturday night are numerous.  Spend the day prepping yourself (yay manscaping!) hoping to have a Texas-Sized 10-4 of an evening only to go home around 2:30 and stumble into bed clinging your pillow and hoping for a better day tomorrow....with no hangover.  New Year's Eve....Saturday night in May....it's almost the same.

#BetweenTheSheets: First Half Report Card Time
Who excelled? Who faltered? What about #TeamUpset?

First off, HAPPY HOLIDAYS curling fans!  I hope you are all taking some much deserved time with loved ones over the next few weeks and celebrate the holiday season.  Curling athletes and fans alike have been going hard over the past few months with grand slam events, world curling tour events, super spares and Olympic preparations.  As Christmas fast approaches, I truly thank each of you for your continued support towards this blog and wish you all a Happy Holidays or Merry Christmas or Happy Hanukkah or whichever celebration you observe....and a Happy New Year as well!

Now before we dip into the RumNog's or Wine or Paralyzer's or continue the Beer Advent Calendar (Ok maybe some or most of you already have...perhaps #TwineTime included) we have some catching up to do.  You know when you return to your home town for the holidays and meet for a choice beverage with a high school friend you haven't seen in years to catch up on all the details going on in your lives...I feel like you and I dear reader need to do the same.  It has been a few weeks and lots has happened.  We need to review the results on the ice over the past few weeks and unveil the final #PowerRankings of 2016.  After that, let's reveal the first half report card for the 2016-17 curling season!

#BetweenTheSheets: Purple Reign In The Soo
The grand slam of curling season continues with The National 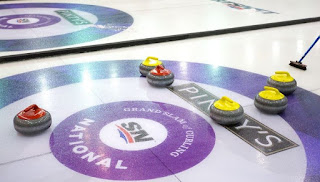 What a week of curling we just experienced rock heads and stoners!  The Canada Cup brought together the top men's and women's teams in our nation to battle it out for a spot at the Olympic trials next December in Ottawa (as well as the trip to Vegas for the Continental Cup and some money).  Curling fans barely have time to discuss the excitement of last week's action however as the next stop on the Grand Slam of Curling tour is already here.  The National returns home to Sault Ste. Marie, site of the very first event back in 2002.

We cannot just jump into the excitement of another #gsoc event without taking time to acknowledge the amazing accomplishments of last weekend's #wct action....oh and congratulate our newest Canada Cup champions.  Here is the #GunnerRunback for Week 16: 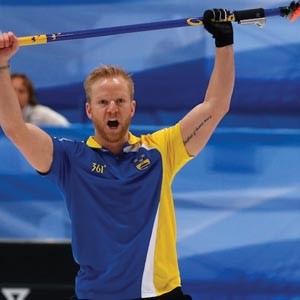 2004 World Junior Curling Champion.  2009 Universiade Champion.  5-time European Champion, including the the now three-time defending winner.  2-time World Champion.  Olympic bronze medal winner.  And now 2-time (back-to-back) Grand Slam of Curling Champion.  The resume for Sweden's Niklas Edin is quite impressive.  In fact, the world may just belong to the #SwedishViking and we are all lucky to live in it.

With accolades and championships like those listed above, one would think King Niklas would truly reign over the curling kingdom with an iron fist.  However, sit down with him and have a conversation and you instantly forget the accomplishments and get caught up in the genuine, nice guy personality Niklas Edin truly has.

I have been a fan of Edin's since his world junior championship win in Trois-Rivieres, Quebec.  As a fan, I knew this man would be a force to reckon with in the curling world for many, many years to come.  Ok I realize many people made the same prediction and there is no actual physical proof I said this but still...just take my word for it #TwineTime fans.  When I reached out to Niklas and asked him if he would be willing to join the #TwineTime family, honestly, I set my expectations low for a response.  He is a World Champion.  A European Champion.  A two-time Olympian.  Why would he want to sit down and talk to a "fan" blogger such as myself?