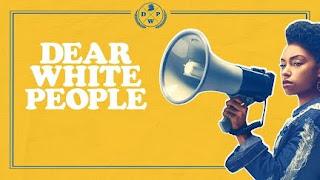 Let that set in for a second. Read it again. And then tell me what your initial thoughts are?

If you did not know the premise of the documentary and you were only told the title, what would you think? I am going to guess 99.9% of you would instantly draw the comparison to President of the United States Donald Trump's 2016 campaign slogan "Make America Great Again".

Now we find ourselves polarizing the curling community based solely on a title. The title will do one of two things: draw interest from those who resonated with the 2016 campaign slogan or draw ire from those who the slogan resonated against. There will be little middle ground here.

And if you do not know why or understand why, let me make go back to Netflix and say, "Dear White People..." how are you not aware?

The MAGA-movement across the US has divided the nation more than building it up. MAGA is not inclusive and inviting. It is exclusive and elitist. The statement is made to harken back to a time when many Americans were not able to "live your best life". A time when inequality dominated the landscape. It was great for a few and dismissive for many.

We all know the connections MAGA had during the 2016 campaign. The statement rallied interest from white nationalists and white supremacists. It defined and created the Alt-right, a combination of nativist, protectionist and semi-isolationalist ideologies.

The battle lines were drawn. In one corner sat, for a majority, white heterosexual cisgender Americans. In the opposite corner, everyone else. From one campaign slogan. And this was supposed to "make American great again" through unity? #FakeNews

So what does this have to do with the curling documentary? If you are still asking, "Dear White People..." you are missing the mark once again.

Lets be real here. Those who created this film knew EXACTLY what they were doing. These are not dumb, uneducated people. Even in the film description, as per a message board post on CurlingZone, the film "delved into the politics of today". The title selection was intentional. The alignment towards the MAGA reference was thought out. This was pure marketing...and it backfired. And it should!

What are the many ways in which this title fits? We have a plethora of words in the English language. String any together and make a sentence. Or a title. The only title that "fit" was "Make Curling Great Again"? And next time you want to "create conversation" try doing so that actually opens the door in inclusion where everyone has an equal seat and voice around the table. This is inviting a vast majority of people into the room but telling them to stand against the wall at the back of the room and wait your turn to speak....which will never come around because "we" are still speaking.

Trying to seize social media hype towards your project through the close proximity of an already polarizing slogan does not "create conversation" but rather creates separation. This very blog posted in August about the sport needing to find its social conscious as it lacks behind every major sport. This is a white heterosexual rich person sport. Straight up. Being honest. And I love curling. I devote a blog to it. But lets call a spade a spade. We have not blended the lines outside the comfort zone demographic as well as we should. Fact!

New Canadians. Minority populations. LGBTQ+. Youth and #NextGen athletes. Where you at? A documentary on curling should help market the sport to all these socio-demographics. A title "Make Curling Great Again" is going to do that? With a strong connection to "Make America Great Again" which undervalues, de-humanizes and straight up does not care about same socio-demographics?

We have heard curling talk a big game. Heck, after I hit publish to my post back in August I had many people come at me and tell me I was wrong and curling has done a lot to develop a social conscious. In some instances yes. But the collective needle for the sport? Hardly! When we sit around and say we are doing alot and moving the needle forward yet the stats and results show different, this is being elitist. We can talk a big game on self-promotion and talk about the sport culture is inclusive but is it? How? What are you DOING? Not what are you SAYING!

This film is not helping #growthesport and "create conversation" but rather capitalizing on a polarizing political landscape in the US and using it to forward a self-agenda marketing campaign towards your own project. What was ignored by the filmmakers was the common sense of alienating members of the community and starting a political debate for self-promotion. I guess there is your creation of conversation. But was that the intent?

Curling should be a sport where politics are put aside. Where people from all walks of life can come together, interact, engage and have fun outside usual social groups. Curling can bridge the socio-economic gap. And while we try to take two slides forward the simple title of this film takes us three slides back.

I know some in the sport are trying. Some clubs are making strides forward. This is not to paintbrush everyone the same. Positive movement is happening, especially at the grassroots level. But we need to do more. Increased peer-to-peer mentoring, lessons learned and best practices at the club level. Member associations taking a harder stance on encouraging stronger inclusion practices and principles through better training, education and assistance.

Look these are smart people. Nice people. Great people who believe in curling and have a full-time passion for the sport. Those who worked on this project are not bad people. Misguided on thought process though? Absolutely. Only they know the true intent on their decisions and actions. But to not clearly think this through and recognize how polarizing this title could be, it was poor judgement. Own it!

And if you still don't get it nor understand why this title can be alienating to many, take a look in the mirror and see how closely related you are to the majority on the curling ice and sitting around your club board of director table. Consider this quote from the Neflix series, "The minute black kids sit together in a cafeteria, white folks cry self-segregation. Nevermind that white people have always sat together and always will." You can insert any socio-demographic group into the first line in the quote and it will resonate.

And if you STILL don't understand why the correlation hinders the sport more than grows the sport, I have one question for you: